I have entered the 28km Two Bays Trail Run  in mid-January (there is also a 56km race option, the full out and back journey). The Two Bays Trail is a 28km trail on the Mornington Peninsula in Victoria. It takes you from Dromana, on Port Phillip Bay, to Cape Schank, on the Bass Strait. The first part of the trail is a very steep rise out of Dromana up to Arthurs Seat (an elevation of 1,000 feet over 3km). This part of the run has established a reputation for being just plain tough.

I don’t often check out a course ahead of race day but given the reputation of this one for its tough hills and rugged terrain I thought it best this time to tick off a few boxes in my relatively ‘rough and ready’ race prep. In particular, I needed to be sure my heart could cope with the ascent up Arthurs Seat, especially since this seemed to be the biggest challenge along the trail.

For a while, I have tended to stick to road runs and triathlons with relatively flat courses, not wanting to overload my heart too much. Over time, I’ve become stronger through regular training, which has included increasing my distances. I’m generally feeling better prepared these days, both emotionally and physically, to take on more challenging events. Earlier this year, I conquered The Great Train Race, running against the steam locomotive Puffing Billy through the hills and fern gullies of the Dandenong Ranges.

My decision to enter the Two Bays Trail Run a few months ago was a logical ‘next step’ for me in building my mental toughness and generally setting a new goal to help improve my strength and endurance. What is more, my heart feels ready to take on board these challenges.

Over the last couple of years, my strength and endurance have improved. I’ve gradually increased the kilometres in training and generally put in some hard yards. I’ve also become better at managing my heart matters, especially during those moments in training or racing when my heart rate might get a tad too high. On such occasions, I may not feel my heart doing anything extraordinary but will suddenly notice I’m putting in effort without reaping rewards, the unexpected onset of fatigue in the middle of a workout. It’s quite a different feeling to simply ‘hitting the wall’. This might last for a couple of minutes, perhaps up to 20 minutes at worst. I’ve experienced it across all domains, my bike, run and swim sessions. Easing off the pace for a short while usually resolves the problem.

At other times, I’ve actually felt the palpitations rising in my chest and throat, and very rarely felt light headed, a strong signal to back off straight away. I should stress that I don’t experience palpitations very often, they have typically occurred when I’ve picked up the pace in the closing kilometres of a running race. I’ve learned now to simply hold a steady pace and not accelerate towards the finish line … just keep on cruising comfortably is a much better and safer approach for me.

Well, on Saturday just gone, I managed the ascent of Arthurs Seat without my heart getting over-excited, albeit I had to walk along some of the steepest parts; but, apparently, even some of the front runners do that. To be honest, this was the most important box for me to tick off today.

Now, I will add, I discovered that this hill climb is actually a mini-mountain, so Saturday was also a wake-up call if ever there was one. I’ve clearly a load of training on hills (perhaps, better mountains!) to do before the big day.

I tend to be a minimalist when it comes to race nutrition, erring towards liquids rather than solids. It has taken me quite some time to get used to consuming food during an event or training. When I was adapting to longer running, I experienced a fair amount of gut problems, including the unpleasant runner’s trots. That’s not much fun, I can tell you! My gut seems better adjusted now.

I can get by with simply water and the odd gulp of electrolyte for 15-20km, and do that regularly on my training runs. However, Two Bays Trail Run is not simply a road run but takes you through national parkland, literally into the scrub. In the middle of the Australian summer, this can become a hot and relentless environment. I was keen to explore the territory and see how testing the landscape might be. 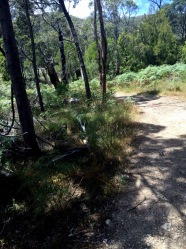 During my run on Saturday, I gulped down plenty of water along the 20km of trail that I covered. This was more than the usual amount of liquid that I would consume during a regular training run. For sure, it was a relatively warm day for running, probably around 30 degrees at the time. A cool-ish breeze helped a lot. The weekend’s run made me appreciate that I will definitely need to carry plenty of water on race day. I had only a plastic water bottle with me on Saturday squashed down to fit into my hand. I topped up once from a water tap in the garden of a house along Waterfall Gully Road, and then ran out of water altogether about 3km from home (which didn’t really bother me). I chewed on a few glucose tablets along the way, well into my return trip. A back-up of good old-fashioned snakes in the rear pocket of my shorts were not needed, after all.

My mobile phone provider is Vodafone, which gets a bad rap on the Two Bays Trail Run website. Thankfully, though, my mobile phone held its reception pretty well. I believe Vodafone has improved its mobile coverage over recent times so I think I can count on it for my emergency back up on race day. This was reassuring, for I always have to be prepared for a random heart event, no matter how unlikely I think that might be. Or, as I came to realise, tripping over a snake can’t be ruled out. I felt relieved to see my phone was reliable. Another box ticked off, and me fulfilling my duties as a ‘responsible’ race participant!

The Thrill of a Good Day Out

Mobile reception aside, I got lost in a beautiful part of the world with all sorts of creatures and fabulous scenery. The highlights were a large tiger snake crossing my path and a friendly echidna looking content in the scrub.

My heart matters paled into insignificance. It was one of those days when you really appreciate what running is all about and how lucky you can be to get out and just do it. These days, I never take it for granted. I count myself lucky.

I will confess, I indulged in a slushee and hot sausage roll from a convenience store at the end of the run, the closest food I could source from where I’d parked my car at the foot of the trail. It tasted absolutely fantastic.

All in all, the test run went well and I had a ripper of a good day!